The Obama administration refuses to acknowledge that it was due to the Bush administration policy on interrogating terrorists that information was received to stop several more US bombing attempts over the last decade and the information that eventually led to the capture and killing of Osama bin Laden! Yet, the Obama administration continues to investigate CIA interrogators whose interrogation methods have resulted in this information. I say it’s time to leave our military and our intelligence officers alone and let them do their job regardless of how uncomfortable it makes you feel!

We were initially told that photo's of the dead Osama bin Laden would be released to the public last Monday, then Tuesday as confirmed by Leon Penetta the CIA chief and then Obama made a statement that he would not be releasing the photos for fear of retribution! 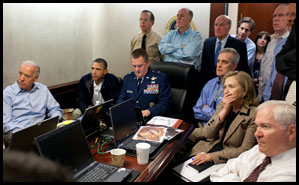 He did not want to disturb people with the graphic nature of the pictures. President Obama have you ever heard the name Nick Berg? Remember him, the American who was videotaped by Al Qaeda as they sawed his head off and then posted the video on the internet? It was the most gruesome thing I have ever watched and yes it did disturb me, it made me want to see every last Islamic terrorist shot dead, especially Osama bin Laden!

Read more »
Posted by Unknown at 4:19 PM 2 comments: Links to this post

President Obama went on television last night and spent about 9 minutes taking personal credit for the death of Osama bin Laden. During what looked like an obvious self-promoting re-election stump speech in the White House he used his two favorite words “I” and “Me” numerous times when describing how “HE” found and killed Osama Bin Laden.

It was as if he himself found the whereabouts of the notorious world terrorist clothed himself in commando garb, slathered camouflage paint on his face, threw an M16 over his shoulder, dropped into the compound screamed out; “Osama Bin Laden Obama is here and let me be clear on this, I’m here to take you out so that I can reassure my re-election. No matter what you do, you’re gonna’ make my day!”