The TRUTH about Inflation

Let me start by saying contrary to what the Federal Reserve will tell you inflation is not our friend especially in a downturn recession as we are in today. The simple fact is this; if your income is not rising but the cost of everything you consume is rising you will either be forced to consume less or go deeper into debt to maintain your current consumption level. Unfortunately some people have little choice in the matter and will rack up additional debt just to temporarily stay afloat!


Here is the dirty little secret that is happening right now in our economy. Inflation is real and it is much higher than the government wants to let on. Retail prices in April were 3.2% higher than the year before and it was the biggest increase in any 12 month period since October 2008.

But what has caused retail prices to rise in a poor economy with less demand? Although there are two factors to the answer I am only going to focus on the first; escalating oil prices.


Oil is not just the substance used to make fuel for our cars so cutting down on our driving will not solve the high price of oil. Oil is used as an ingredient in nearly EVERY facet of our lives. It is used in manufacturing all plastics, most apparel, most household items, food products and cleaners. And it is required to operate machinery of every kind. But one of the biggest consumers of oil in our modern way of life is transportation. If the cost of transportation goes up EVERYTHING goes up!

According to the American Petroleum Institute U.S. PUMP PRICE UPDATE –MAY 11, 2011 the cost of oil in the last 12 months has increased by 44.9%! Not only does this hurt us at the pump but it is creating a vicious circle that is keeping our economy stuck in a rut.

President Obama in a recent campaign speech told companies that they just need to start hiring again. Wow! What a deep thought and what great advice. But the problem is more complex than just that Mr. President.

So what is the answer to end this cycle? Before I give you my answer let me tell you the other and frankly the main factor in inflation. It’s called counterfeit US Dollars and the Federal Reserve has printed at least two trillion in the last two years.

I call them counterfeit because the FED is printing more money than the US Government is taking in each month. This alone is causing the value of the dollar to decline and it is also causing major turmoil around the world since the US Dollar is the world currency, at least for now anyway! Heaven forbid what will happen if and when it is replaced by a European or Chinese currency.

In order to get out of this recession the FED MUST STOP its quantitative Easing program—it must stop issuing US Treasury Securities and then buying a portion of them back with counterfeit money. 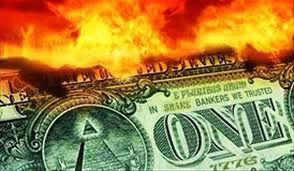 Over the last few months China, the largest holder of US Treasury Securities has been divesting its holdings at an alarming rate and now there is talk of China selling two-thirds of its US debt holdings. If this happens the cost of everything will head sky-high as inflation soars.

Companies can only hold on so long before they have to start passing on increased costs to the consumer. Retail prices in April jumped 3.2% higher than the year before making it the biggest increase for any 12-month period since October 2008.

Now let’s add insult to injury; The PPI (Producer Price Index) that measures the costs businesses incur for products they sell to consumers, increased a huge 0.8% in April. This leaves the 12-month increase in the PPI at 6.8%--the highest increase in about three years!

In this prolonged recession most people are cutting back on discretionary items like electronics, furniture, health care products and department stores and we saw another steep decline in these sales in April.

And last, home values have declined and many people are upside down with their mortgages making it impossible to take advantage of refinancing to a lower rate or selling their home for enough money to pay off their big mortgage—hence historic foreclosures.

It was not my intent to write a doom and gloom article. I just wanted to point out the truth about what is happening to our economy to remind people that now is the time to get their finances in order, reduce debt and save money. I know that sometimes the truth hurts but a little bit of pain today is much better than a lot of heartache and “shoulda-woulda-coulda” tomorrow!