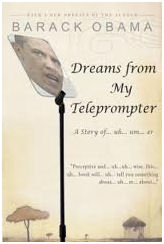 The inventor of the TelePrompTer Hubert J. Schlafly Jr., died on April 20th in Connecticut. We attribute this man’s invention as the savior for President Obama who cannot talk without the use of this device. In fact, anytime Obama speaks without a TeleprompTer he struggles for the right word or phrase to use. Most of his words are divided by a slew of “uhhhh’s” and his famous statement; “Let me be clear.” So far just two years into his Presidency Obama has used the let me be clear comment more than a Windex salesman at a dirty glass convention!

There is no comment from the White House yet but there are great expectations that President Obama will attend a memorial for Mr. Schlafly later this week. His aides say that the President’s staff is frantically making arrangements to get power to the location of the memorial which will be held about five miles from the nearest town and on the shore of Mr. Schlafly’s favorite fishing hole. The problem is that President Obama will only speak at the service if he can find an electrical plug for his teleprompter.

Read more »
Posted by Unknown at 10:15 AM No comments: Links to this post

A recent poll in the New York Times states: “Nation’s Mood at Lowest Level in Two Years.” The poll suggested that things are not getting better for President Obama—they are getting much worse! 70% of American’s believe that the country is on the wrong track. Is this a surprise to anyone? We have record unemployment hovering around 9%--that is what the government tells you but the real numbers are between 17-20% and gas prices hovering around $4.85 a gallon. A friend of mine who lives in Hawaii pays $5.27 per gallon.